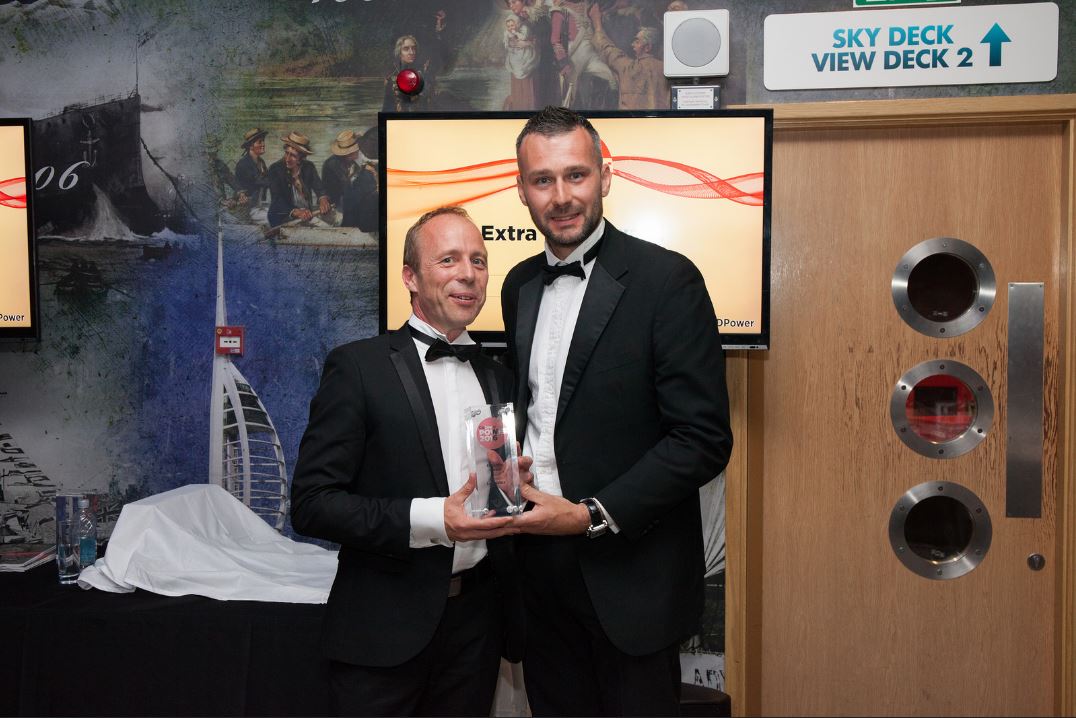 Last year we only had one Extra Mile award, this year we have two.

Humbled, honoured and proud that for the second year running our team has won the Extra Mile Award, given by the people that voted for us.

What a difference a year can make, last year I was just sales manager, this year I have been promoted to ‘The Judge’ an alter ego that seems to have more friends than me, myself. Last year we were all European, this year…I don’t know, European, British, Scottish who knows. Last year the Car Dealer Power Awards were held at the Spinnaker in Portsmouth this year they were held at the Emirates Spinnaker, still in Portsmouth just a new temporary owner.

Last year we were working out of an office on an ex cold war airfield with a considerably smaller team than we have now, as well as a much smaller number of members. This year we are based in new headquarters, a lovely three floor Georgian town house, with a team that is almost double the size and membership which has increased by 30%.

Last year we only had one Extra Mile award, this year we have two. We are humbled, honoured and immensely proud that again our members took the time to vote for us.

Last year The Motor Trade worked within the confines of the Sale of Goods Act. Since October 2015 they have had to contend with the Consumer Rights Act 2015 and all the changes this piece of legislation brings with it. We have had our work cut out for us.

The biggest change in consumer legislation for decades has meant we have had to scrutinise and understand this new law, so that we may better advise our members as to what the changes mean for them and how best to operate within it. We led the way with our advice on the Act, not just to our members but the industry as a whole.

This proactive approach has led to our legal advisors being quoted in the national press on numerous occasions and speaking on various trade podcasts, radio shows and TV shows. This has had the effect of creating ever greater demand for our legal services and advice. We are now handling 3,000 telephone calls per month, this has meant that we have had to double the size of our legal team from four to eight and take on staff in all other departments.

This increase in demand for our services has been a huge challenge for Lawgistics, a challenge which we have risen to, that’s not to say it was effortless or without problems. The sheer volume of casework has led to delays in our response times when we were at our busiest. It has felt like we were being swallowed up by the sheer volume of incoming cases, but the Legal and Admin teams have battled on in an effort to provide the level of service and quality of advice that our members expect and deserve.

This award is confirmation that while there may have been delays, our members still feel we go that bit further to aid and assist them when they have an issue. Of the 3,000 calls I mentioned above we resolved 96% of the issues raised in those calls before they get anywhere near court.

I myself as Sales Manager am immensely proud of the team and the service they provide, because as busy and as overwhelmed as they have all sometimes felt, they have continued to support, advise and fight our members corner, protecting their interests over a huge range of issues, saving them time, money and in some cases their business. A fact which has been recognised with this award which is wholly voted for by Car Dealer Magazine readers and our members.

It is a testament to the team here and all their hard work that through all the turmoil of law changes, moving premises, increase in membership and caseload that we have received this award for the second year running an award that is for customer service.

So in conclusion I would like to say thank you. Firstly to the team here who have been immense and who always put our members first. Secondly to our members, who took the time to vote for us. This recognition means so much to us especially when it comes after such a challenging year for Lawgistics.